A Gallery of Payne Nursery Catalogs

Beginning in 1906 with two publications, Theodore Payne prepared and published nearly 50 catalogs promoting his seed and nursery products. The general 1906 catalog features a rather standard assortment of fruit trees and roses. The other was devoted exclusively to California wild flowers and a bit more exciting. At first, the Payne catalogs were available every few years. Around 1916, they became a regular publication, with separate catalogs for bulbs, wild flowers and the full horticultural line distributed every year. The last general catalog was released in 1932, when Payne began facing heavy street assessment fees from the City and had to cut expenses. From then on, his catalogs were exclusively focused on California wild flowers.

The following images are covers of the general seed and nursery catalogs, wild flower catalogs, and bulb catalogs published between 1906 and 1953, all found in the archives at Theodore Payne Foundation. Many of these catalogs are also available in libraries across the nation, as in the late 1950s, Theodore sent sets of catalogs to botanic gardens and libraries that he thought would value these documents for their unique and important representation of his nursery operations.

Theodore Payne’s archives are in the Special Collections at the University of Los Angeles. 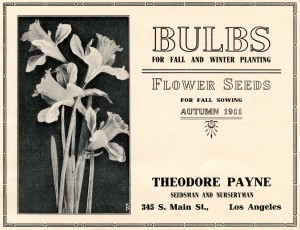