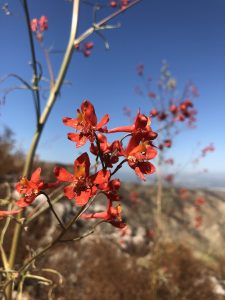 It was hard to imagine what would come of the fire that my colleagues and I saw ripping through the Verdugo Mountains in September of 2017. We witnessed the power of fire and wind to transform acres upon acres of thick, decades-old vegetation to ash and dust in a matter of days. These were hills that generations of TPF staff have combed through as observers, horticulturists, and collectors. As we watched them burn in an era of climate change, and as invasive plants and urban development continue to threaten their ecological integrity, anxiety over the chance for a healthy recovery weighed heavily upon us.

The hills would likely have remained more or less barren if not for the sporadic and soaking rains that we had in the first quarter of 2018. Yet with those few life giving rains, we observed the natural succession of fire-following wild flowers the likes of which I have never seen. Although the process and features of post-fire regeneration in the Verdugos are well documented and understood (Soza, V.L., S.D. Boyd, L.J. Gross, and N.S. Fraga. 2013. Vascular Flora of the Verdugo Mountains and San Rafael Hills, Los Angeles County, California. Crossosoma 39: 1-140.), to see them first hand has been awe-inspiring and has pushed me to explore the area to new depths (or should I say heights).

Beginning in April of this year, after obtaining permission from the land manager (Mountains Recreation Conservation Authority), we began to venture into both the northern and southern boundaries of La Tuna Canyon Road where it intersects the 210 freeway. While predominately a chaparral plant community, there are also swaths of coastal sage scrub, as well as riparian plant communities that host several beautiful and uncommon species. These areas would otherwise be inhospitable to those venturing off of the path, if it were not for the fire. Thick, thorny vegetation, not to mention large and persistent patches of poison oak, make traversing the hills and ridgelines nearly impossible when the vegetation is mature.

The season began with a profusion of annuals in the legume and borage families. There were blankets of coast lotus whose small yellow flowers, along with those of common eucrypta, drenched the air with a sweet perfume. Pockets of bright white popcorn flowers dotted the landscape. Rising above were electric pink stinging lupines offset by the lush grape of Canterbury bells. As its name implies, stinging lupine is covered with thousands of tiny stingers. Even wearing long sleeves offered little in the way of protection, but immersing myself in their glory was going to happen one way or another. Poppies began early in the lower elevations of La Tuna Canyon, and the bloom moved gradually upward as the heat of summer encroached. Interestingly, the quintessential native wild flower that grows in the Verdugos is less of a robust orange than folks are accustomed to and more of a gently yellow orange. 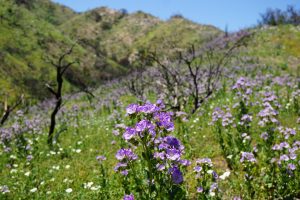 As the season progressed, the diversity and spectacular displays of phacelias and other borages was truly stunning. Massive shows of giant-flowered phacelia, short-lobed phacelia, and whispering bells graced the blackened earth with various shades of white, pink, purple, and yellow.  These wild flowers, though beautiful, are true warriors of the hills. The leaves of many species are loaded with resins that cause severe contact dermatitis, very much similar to the effect of poison oak.

Bulbs and other geophytes offered something of interest through the season. Star lilies mixed with the slender stems of purple hyacinth in the understory of burnt chamise and California lilac, whose black frames resembled oversized bird cages on the hills. Common muilla crossed paths with goldenstars and blue and scarlet larkspur. The latest showing from bulbs came from two of my favorite flowers, Plummer’s mariposa lily and Humboldt lily. These exquisite plants grow in very different conditions, but offer some of the most intricately beautiful flower forms that grow in our local hills. 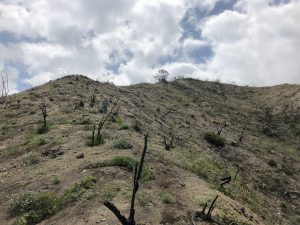 As flowers began to fade and seed began to set, we began scouting for seeds. We collected over 20 taxa of flowering annual and bulbs to cultivate at TPF. Much of what we saw or collected in those hills would not have been possible without the unique conditions that fires present. Fire decreased the competition for light among the annuals and helped destroy the weed seed bank. The blank canvas also set the stage for regeneration of woody shrubs and trees, such as sumac, lemonade berry, ceanothus and manzanita.

Fire was also directly related to the germination of many seeds in La Tuna Canyon. Allow me to explain: seeds are like locks. Some locks are simple, with the key to unlocking them being merely the addition of water. Some seeds, however, need very particular conditions or treatments before they can absorb water and begin to germinate. Smoke and heat, by-products of fire, are key elements to breaking down an otherwise impermeable layer protecting the germplasm, known as the seed coat. Plants have adapted over millions of years to take advantage of conditions presented after a fire, and we are fortunate enough to be able to appreciate those adaptations in a very tangible way. The beauty of the post-fire landscape is breathtaking. Though it is hard to see that beauty in moments when a fire is destroying something that has taken so long to create, in this case we can take the saying “In order to create, we must destroy” quite literally, knowing that life will persist and recovery is possible. 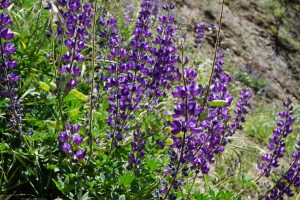 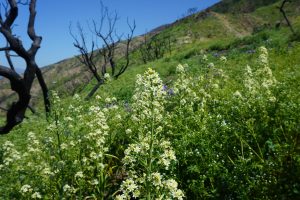 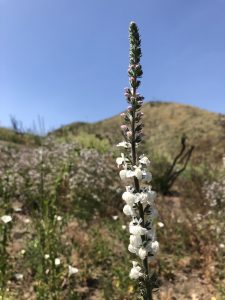 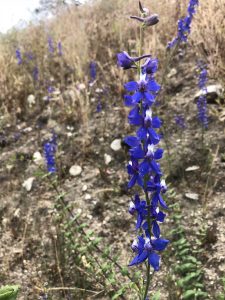 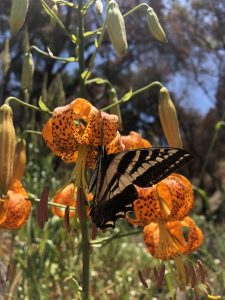